No spectators on the Occoquan

VASRAResults
@vasraresults
Just a reminder, NOVA Parks is not allowing spectators at regattas. We don't know if this will change as the season progresses. Violations of this rule will result in an unsportsmanlike penalty against the offender's team and may result in them not being able to row.
6:50 PM · May 3, 2021·Twitter Web App

Because of high winds, the scrimmage scheduled for 5/1 has been cancelled. We apologize for the late notice, but our rowers' safety is paramount.

Crew parents: A few reminders for those of you who plan on watching this weekend's scrimmage: Please stay out/away from the boathouse, including the bathrooms. We are observing social distancing rules, so we are limiting it to rowers and coaches for the boat house. Please feel free to watch from the river front.

Also, while during past years we have had food to eat, we're putting the kibosh on that at least for this year because, again, pandemic.

That said: We are thrilled to get to watch our kids don the water again, and hope to see you from a safe distance this weekend. Row Titans!

The 2021 Uniforms have arrived and are available for purchase. While sizing information was captured during season registration, the cost was not included.

Please use the link to purchase your uniform by clicking HERE. They can be picked up from the Head Coaches.

All Student-Athletes should have completed the registration process prior to coming to practice. Please see next post below or click HERE.

Registration for the Spring Season Will Open March 23rd

The spring high school competitive rowing season runs from April 12- June  19th. The quantity and variety of competitive regattas is still in development. News to come.

The Boathouse & Docks are Closed to All Other Activities Pending Reopening Direction From Alexandria City Public School Officials.

The TC Williams Coaches are working with the Athletic Director to establish safe, competitive rowing opportunities for the entire 2021 season.

The TC men's team at the W-L Triathalon 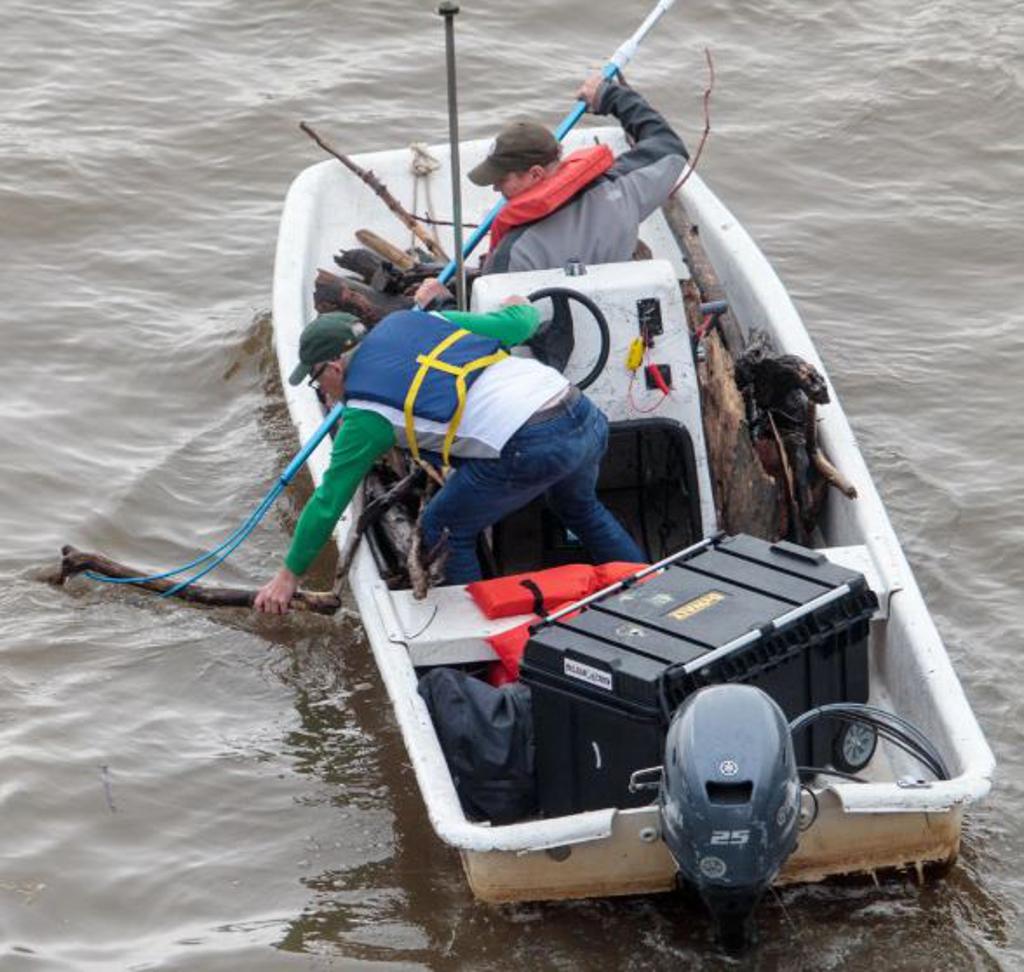 Friends, Family, and Alumni of TC Crew can complete this FREE registration to receive occasional emails about upcoming events, etc.

Traditionally, swim tests are required every calendar year for all Athletes and Coaches, but pool limitations are compelling a change to that policy for 2021 ONLY.

All 8th grade Student-Athletes, and any Athlete who has never rowed on a TC Williams Spring Crew, need to complete a swim test.

The dates for the tests are:

All swim tests are conducted at Chinquappin Rec. Center adjacent to TC Williams.

We have slashed prices on some of our most popular items!

This is your last of the T.C. Williams Crew gear with upcoming school name change happening soon.  Get the last of this gear while you can.  We are not ordering more - once it is gone, it is gone!

The TCW Crew Closet will remain online and looks forward to receiving your orders!!  After you order, you will be contacted about pick-up or delivery. 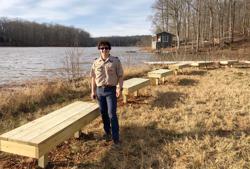 Stephen Ralis, a senior for T.C. Crew, recently completed his Eagle Scout project by constructing and installing eight spectator benches for the racecourse finish line at Sandy Run Regional Park. Sandy Run is home to many of T.C.’s regattas on the Occoquan River.

In order to achieve the Eagle rank, Scouting’s highest honor, Scouts must plan, budget, lead, and execute a service project for a non-profit in their community. Stephen was pleased to be able to combine his love of rowing with his duty to Scouting.

In three months, Stephen went from writing his initial proposal to executing his vision with the assistance of 30+ volunteers from his Boy Scout troop and his rowing teammates: Will Bavin, Barry Najarro-Blancas, and Tim Chen. The benches look great. We would like to thank Stephen for his contribution to making the finish line a more enjoyable place to cheer for our rowers. We also congratulate him for his scouting accomplishment. Hopefully, we will get to see his benches in person in the coming months!

TC Rowing is proud to announce that senior Anna Hill has made the 2020-2021 USRowing Scholastic Honor Roll.

Hill was one of 43 student athletes to earn spots on the 2020-2021 honor roll. In all,  USRowing received 146 nominations from athletes representing 107 school and club programs across the United States.

The USRowing Scholastic Honor Roll recognizes high school seniors who have excelled in both academics and rowing. Applicants must be USRowing members, have rowed or coxed at least one year, and successfully competed at or above the league or regional level.

Alexandria Crew Boosters is the umbrella organization that oversees and supports the crew programs for youth in Alexandria, including the T.C. Williams crew program, as well as the Old Dominion Boat Club crew program and the Alexandria Community Rowing program for adults. The Alexandria Crew Boosters raises funds for all racing shells and equipment, including the launch boats that accompany the rowers. ACB also oversees the summer and fall learn-to-row programs, that are open to students from other area schools. We appreciate donations of any amount. 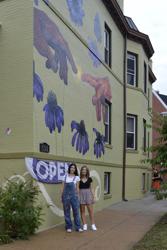 She wanted to show her support for the Black Lives Matter movement in a tangible way, but social media felt insufficient.

Instead, she began thinking about a mural on Alexandria’s streets - one that would send the message of unity that she wanted to convey.

Bavin, 16, asked a few business owners if they’d let her use their building as a canvas. Then, the coxswain for the T.C. Williams rowing team thought of Jaime Rubini.

Rubini, who owns Rubini’s Jewelers on the corner of Wythe and Washington streets, is a coach for the T.C. rowing team, and the jewelry store, which sells rowing-themed jewelry, is located blocks from the boathouse.

Rubini and his daughter, Joanna, also a former rower, agreed to the plan.

Bavin and her friend Caroline Mitchell, 17, a rising senior and fellow aspiring artist, got to work.

They worked through several design iterations, with Mitchell working them out on her IPad and collaborating with Bavin on a plan.

Finally, Mitchell, who visited the Sistine Chapel in Italy last summer, landed on an idea with echoes of the famed chapel’s ceiling - a black hand and a white hand, reaching toward one another, fingers pointed just as they are in Michelangelo’s “Creation of Adam,” with a spark electrifying what could happen if they united.

Purple flowers, painted on to look like they are climbing up the wall, show, “there’s room to grow in our society,” said Bavin.

The result - a vast mural on the side of the jeweler’s building, showing a black hand and a white hand reaching toward one another, fingers pointed - now greets anyone heading into Alexandria going south on the GW Parkway from Washington.

“They just did a beautiful job,” said Joanna Rubini, who worked closely with the girls to approve the design. She wanted the hands to touch. The girls resisted - they wanted to show progress still needed to be made - and finally, they found a compromise. Now, a spark hovers over both fingers, showing the potential of what unity could bring.

It took eight days for the project to be completed, days when the girls climbed scaffolding. To raise money for it, the girls designed and sold “Black Lives Matters” T-shirts that they had designed, with the proceeds going to scaffolding and supplies.

Bavin, whose job as a coxswain involves motivating her rowers, “kept me on task,” said Mitchell. Bavin, meanwhile, knew she’d have to rely on Mitchell’s enthusiasm and skill in order to make the project a reality.

“I just feel like it gives a message to all the cars - because there’s so much traffic coming down this road - that we all need to come together and be unified,” Bavin said.

The two said others have taken note of their work; they are working with other local businesses who say they are interested in hiring them for future murals.

Jaime Rubini said he was impressed by the initiative both girls showed in making the project come to fruition. “They were go getters,” he said.

“The bottom line was that the artistry and the concept and then, the way they created and developed and did the project is tremendous,” he said, saying customers have noticed.

“They will come in and they love it, and they want to know who did it,” he said.

It is time to celebrate our T.C. Crew senior class of 2020! This last Saturday their teammates, coaches, and parents did a drive-by to honor our seniors and deliver the coveted T.C. Williams Crew blanket. We will miss this class of young men and women! We wish you all the best!
Go T.C.! Row T.C.!
The seniors are Madeleine Allen, Alaina Browand, Ava Elkins, Lydia Greenwood, Sara Rider, Madeline Toaso, Felicity Brock, CJ Chidlow, Emmett Cocke, Townson Cocke, and
Jonathan Hernandez. (Sorry, we didn’t have pictures of all the seniors listed.)

Registration for the 2021 Spring Crew is Open to All ACPS Registered Students from 8th-12 Grades. Please Click HERE to Transfer to the Registration Site.

The Spring season officially begins on April 12th. Depending on enrollment, Student-Athletes may begin their season in phases to allow for adequate social distancing. Participants will receive start dates / times by email no later than April 7th.

At present, all practices are conducted with masks on; Daily Covid self-reporting is required pending updated ACPS direction.

Welcome Back To The Water for the 2021 Season.

Great update from our Boy's Varsity Crew Team this week:

Even with recent setbacks, the grind doesn't stop! As they move into what would have been Spring Regatta Season, our student-athletes have adapted to a "virtual regatta" to keep the spirit of physical fitness and competition alive.

Over the course of the past school year, rowers from T.C. Williams and Washington & Liberty have been putting in a tremendous amount of work towards getting faster on the water. Rowers at all levels at both schools have consistently demonstrated that they're hard-working and persistent

The Boys Teams from T.C. Williams and W&L have always had a complex, intense rivalry. The boys have often worked together during the Fall season as a part of the Old Dominion Boat Club (ODBC) Select Team, which is coached by Derek Parsons (W&L's Head Coach). However, during the Spring, it’s a completely different atmosphere. Representing their own high schools against each other, the boys are extremely competitive and give all they can at the annual scrimmage between the two teams.

As you all know, due to recent events, the water season has been suspended until further notice. So, demonstrating their classic grit, the boys have continued workouts -- on ergs and reporting virtually -- from their own homes, and even plan to conduct a scrimmage! The boys will do a series of challenging 3-minute, 2-minute, and 1-minute pieces. The boys will go as hard as possible and will be recorded for time. Once the results are in, times between T.C. and W&L will be compared. Please be on the lookout for the scores to see who will come out on top this year!

Thank you to our Boy's Coach, Pete Stramese and our Coxswains (as scorekeepers and writers), Shelby Bavin and Felicity Brock.